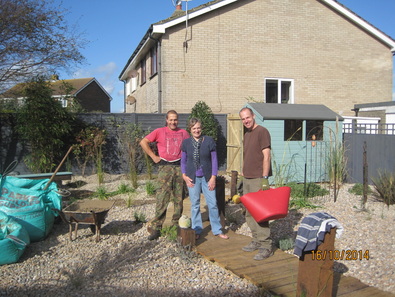 Dru and I met in Camber and I was invited to make some changes to what was a horseshoe shaped flowerbed around a scruffy dead lawn in the back garden. The thought of making a new 'seaside' garden actually in an area of sand dunes was interesting. Test holes later revealed 100% sand down one metre throughout the garden. But as you look around, you see that people are growing a lot of the usual things and must be using the addition of compost or raised beds etc. So I thought I'd have a go.

We decided on a bench in one corner under the existing birch and a new shed in the right hand corner with a connecting decked path. A sea of pebbles (40mm shingle) replaced the old lawn area and smaller ones (20mm shingle) were used to designate flowerbed areas, using fabric throughout.

With my love of reclaimed sleepers we came up with an additional seating area near the house. The same decking boards are used to cover the 'sleeper benches'. The inspiration came to paint the fences (cuprinol ducksback 'silver copse') and then the shed and seating areas (cuprinol 'sea grass'). For me, it was a pleasure to have the addition of these colours which dance together in an interesting way. The trio of painted surface areas makes an interesting link around the garden, also picked up in the fishing ornaments.

With the planting, my passion went for the repetition of grasses, verbena and fennel. The smaller details echo this with anemanthele lessoniana, stipa capillatta Bridal Veil, and stipa gigantea.  The backbone was enhanced with cordylines, two dwarf pampas and one large one near the shed.

Colour will come more with agapanthus, talbaghia, lavender, oxalis, thrift, lampranthus and kniphofia uvaria... and maybe an annual drifted through the old iron gates (some interesting abstract verticals which help to soften the shed). There were some nice existing clumps of erigeron Sea Breeze perfectly situated in the garden. Martin and I must have dug in about 5 tons of compost into the beds and used about 10 tons of shingle.

CLIENT FEEDBACK
"​Thank you so much to you Joe and Martin for turning the garden here into something we just keep looking at in awe. Various neighbours have seen and commented so favourably about it too.
It was a pleasure working with you two guys.
All the best
Dru (& Neil - who sits in the conservatory and goes on saying how amazing the garden is!!)"
Contact
Joe Musselwhite
Hastings, East Sussex, TN35 5JB, UK
07985027615
01424 532892
email: joe.musselwhite@hotmail.co.uk
Copyright 2018. Joe Musselwhite. All Rights Reserved.